What Are Server Response Codes? 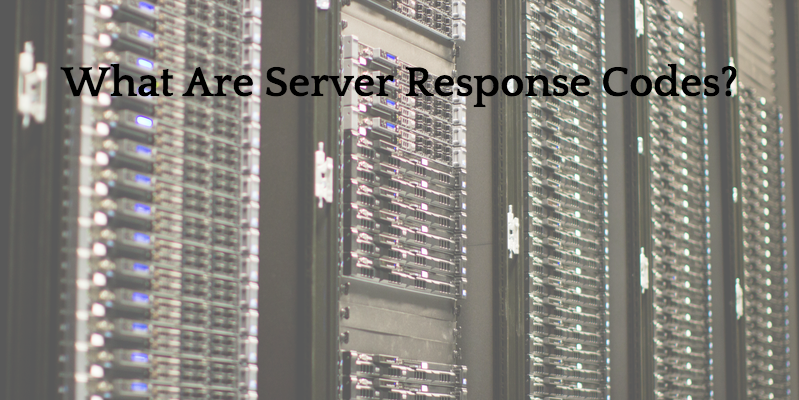 Nothing can ruin a great afternoon like a blasted 404 error page. We’ve all been there – surfing the web like there’s no tomorrow, when BAM! All progress comes to a screeching halt because we land on a page that reads “404 Error: Page not found!”

And then the questions start to rise. For instance, why is it called a “404” page? And are there any other sorts of pages out there we need to be watching out for? To better understand these pages, which are flagged by server response codes, we have to first understand how the web works. Don’t worry, it’s actually pretty simple.

What Even Is the Internet?

Simply put, the internet is just a network. The world wide web is really just a bunch of servers sharing data with one another. Take, for instance, the device you’re using to read this blog post. This device had to request the blog post from a server where it was being stored. The data was transferred to your device and now you’re able to read the content therein. When you request to pull up another page or site, the same thing will occur once more. Data is stored in servers all across the globe. These servers interact with one another to share that data. That interaction and sharing is what we commonly refer to as “the internet.”

Sometimes, though, servers run into problems when trying to complete these actions. That’s when we begin running into issues like the dreaded 404 page. This is called a server response code, and it helps to explain what’s going on if a device or server ever encounters a problem.

Below is a full list of server response codes. Notice that the first digit of each 3-character numeral, such as the first 4 in 404 represents the type of response the server is generating.

Server 100: This response code signifies that the data request was completed without issue and that the process is moving smoothly along.

Server 101: The 101 response code represents more good news. It means that the requester will need to switch protocols, from HTTP to FTP as an example, and that the server is taking care of it.

Server 102: The 102 code means that the server has received the request and is processing it, but that the response has not yet become available. This code keeps a client from timing out.

Server 200: This response code means that everything is a-ok.

Server 203: This response code indicates that the server did successfully complete the data exchange requested, but that the data may be coming from a different source.

Server 204: This response code appears when a request is completed successfully but fails to render any content. The 204 code is often used as a response to a successful request to delete or remove something.

Server 301: The 301 response code indicates a permanent redirect. It means that the data you’re trying to access from a given web address will always redirect to a new web address, where that data is now being stored.

Server 302: This response code indicates a temporary redirect. Whenever you see a 302 redirect as a user, it simply means that the data you’re looking for has been moved for now. In the future, you should expect to find the data in its original place.

Server 400: The 400 response code indicates a bad request. This simply means that the server doesn’t understand how to process a request but this is often fixed by simply resending the request.

Server 401: 401 response codes appear when the page a user is requesting requires some sort of authentication, such as a user id and/or password.

Server 403: Server 403 responses codes are frustrating! The simplest explanation for these is that the server understands your request but, for whatever reason, refuses to fulfill it. What makes this response code so frustrating is that there’s typically nothing the user can do to get around it.

Server 404: This is the one we’re all familiar with. 404 response codes signify that the page you’re looking for no longer exists. This can be a temporary or a permanent condition, but most of the time the error page does not disclose which of these is the case.

Server 407: This response code is very similar to a 401 response. The difference is that instead of the user having to authenticate him/herself, here it is actually the browser that must first prove its credentials.

Server 408: A 408 response code occurs when the browser is waiting too long for the requested data to transfer and times out. This can usually be fixed by sending a new request.

Server 500: This response code appears when some condition appears unexpectedly to keep the server from completing the user’s request.

Server 501: 501 response codes are not incredibly common. They appear when the server is not equipped with the necessary software to complete the user’s request.

Server 503: The 503 response code will appear when a server is temporarily unavailable because of either maintenance or overloading. This is common for sites that are shared hosting plans that don’t provide them with an appropriate quantity of transfer data.

Server 505: This response code occurs when a user requests data be exchanged using a certain transfer protocol, such as HTTP, but the protocol is not supported by the server.

What Server Response Codes Mean to You

As you can see, there are many server response codes and they can get quite confusing if you think too much about them. Fortunately, these aren’t something that the casual web surfer will encounter too frequently. If you do see any of these codes frequently, or perhaps run across one that isn’t included in this list, it’s typically fairly easy to remedy your issue. Simply go to Google and search for information about the response code itself. That will usually let you know how to proceed.